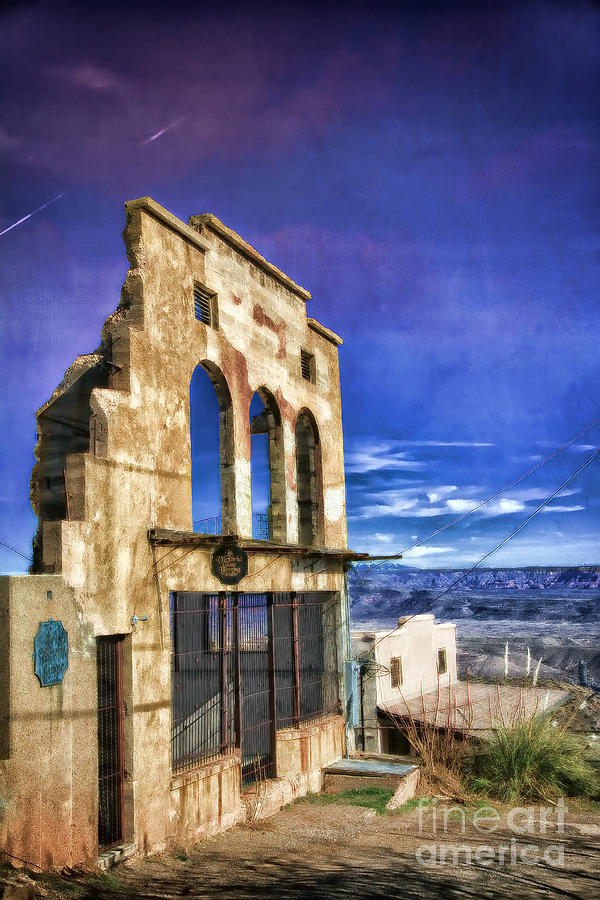 The ruins of the old Jerome Market looks beautiful but eerie at sunset with a full moon. This site is now used as a glassblower's studio. The old market is located in "the largest ghost town in America," Jerome, Arizona. Once known as the wickedest town in the west, Jerome was a copper mining camp, growing from a settlement of tents to a roaring mining community. Four disastrous fires destroyed large sections of the town during its early history, resulting in the incorporation of the City of Jerome in 1899.

Founded in 1876, Jerome was once the fourth largest city in the Arizona Territory. The population peaked at 15,000 in the 1920's. The Depression of the 1930's slowed the mining operation and the claim went to Phelps Dodge, who holds the claim today. World War II brought increased demand for copper, but after the war, demand slowed. Dependent on the copper market, Phelps Dodge Mine closed in 1953. The remaining 50 to 100 hardy souls promoted the town as a historic ghost town. In 1967 Jerome was designated a National Historic District by the federal government. Today Jerome is a thriving tourist and artist community with a population of about 450. Also known as "America's Most Vertical City," the 30-degree incline of the mountainside has caused a number of buildings to slide down the slope. One such building, the Sliding Jail, is another popular Jerome attraction.

Congratulations on reaching over 1,000+ views!

Gorgeous capture Teresa ! The colors blue and purple in background make a perfect background for this glassblower's studio !

Thank you most kindly John.